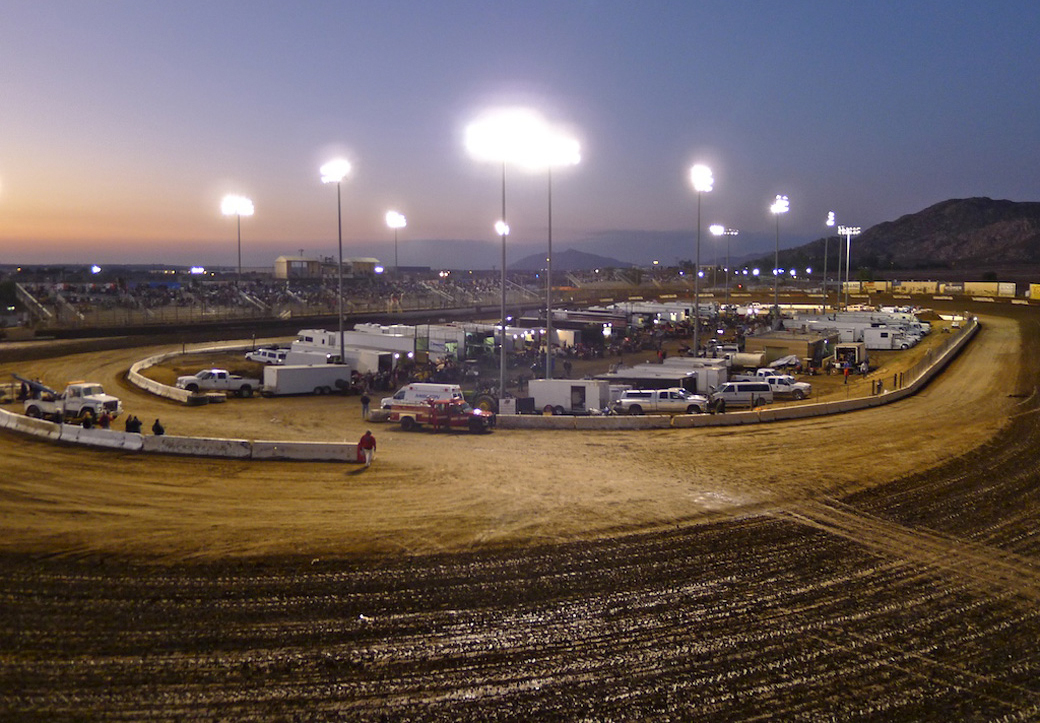 Complete newbie; less than an amateur. Never ridden on a dirt track. This Honda CRF 450 isn’t even warmed up and already my heart is racing.

This is the famous Perris Raceway. I want to do this more than anything I can think of over the last week of mental and physical preparations, but my hands are still shaking.

I try to change my focus. I think of what my friend, Mark Cernicky (a world class racer), told me moments ago: Boner burnout, he called it. That’s he refers to your style when you’re coming out of the corner on a dirt track, and get the bike going sideways spinning the back tire. Boner burnout is what beginners always demonstrate until they figure out the proper technique.

I stop thinking about my potential noob revealing exit style and give the throttle a couple of bumps at the start line. There are eight others lined up with me on an array of brand name bikes doing the same thing. I love that sound, the crackle and pop of naked exhausts revving, then settling down.

Suddenly, the flag goes down and off I go, throttle wide open until the first turn. My breathing has stopped I realize as the other bikes begin to pass me coming into the turn. I know I have to slide into the turn at the entrance. I realize I have to be fully committed. I have to continue to slide through the turn. I want to stay somewhat upright, but that’s counter intuitive, Mark told me. “That’s the least efficient move,” he added. “There’s a particular technique Geoff, especially for the bike you’re on.”

He let me ride his bike, so I had to listen.

So much to remember.

Coming out of the first turn, even though I’m concentrating on getting in position, I also remember that Ron Wood worked on this bike. He works with Cycle World Magazine. This wasn’t just any machine.

The suspension was completely dialed in and it was dialed, so I am going around the track feeling the tires, trying to gauge how much bite there is. I’m pushing it to the limit when suddenly I lose it. I feel me and the bike going sideways into the turn. My heart seems as if it will break through my jacket. I slide into the turn and give it gas and the back end goes around and now I’m spinning out of control—fast! 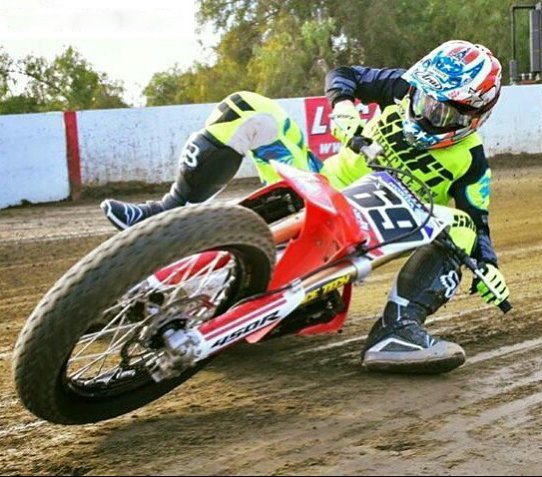 Entering the turn is sometimes described as a controlled crash, throwing the bike down into the dirt until you’re almost sitting on top of it with just the front wheel maintaining direction. When your momentum subsides to an appropriate level, the exit begins by standing the bike up and carefully getting on the gas. It’s at that point that sliding or spinning the rear tire is not good. It’s different on a larger track, but at Perris, the entry speed is critical. Exiting the turn is about gaining the most traction and forward acceleration, and this is done with the bike as vertical as possible. So entering with the bike as horizontal as possible but exiting the turn is the complete opposite. The trick is timing the transition at the apex.

At least that’s how I understood what Mark told me. Unfortunately, I didn’t quite get the hang of it. Each time the round ended, I went in to get some pointers from Mark. He criticized me, which just made me want to keep going until I could master it all; faster and faster.

After a couple of more runs, I went back to Mark for an assessment. He said, “Your attitude on the bike is all wrong!”

Mark wasn’t one to pull his punches.

“You’re not sitting in the right place! Come on, Geoff,” he gently berated me with the look of an irritated father trying his best to be patient but not sugar coating it either.

I’d never done this before and it certainly wasn’t like riding my FXR on Harley Night at the fairgrounds; even having motocross track experience didn’t prepare me for this. You can’t drift a Harley street bike; it doesn’t have the right turning radius.

After three or four runs, I began to heed Mark’s advice and I started to feel it; I knew what to do; I had to ignore the riders and quit worrying about getting in their way and I needed to go flying into the corner.

I’m on my fifth run now. Most of the guys are a lot faster than me and they keep trying to muscle me out by going inside. Twice guys come screaming into the turn so hot, they have their bikes lying on the dirt sliding underneath me to the point where they are going down, dropping like dead flies.

Now, I almost run over two of them as I somehow manage to veer outside just by a hair. My blood is pumping, my heart has long ago gone over the physically allowable limit. It’s crazy as I come around for the last time and three of the guys are still picking up their bikes, scowling at me as I burst by them.

Suddenly, I feel my legs go rubbery. I almost feel dizzy. I’m getting tired. I’m not getting my leg out and I’m in the turn. I’m going down! Shit! I’m wiping out. Bikes are whizzing by me. They sound like giant bumble bees as they seem to be taunting me lying on my side in the dirt. I’m hoping I won’t get hit but I know, like Mark said, I have to get up, dust myself off and get back on the horse.

I did, and I finished the race. When I shut off the bike and took off my helmet, I went into the shack to talk to Mark who had been watching the whole thing and that’s when I met an old timer from the tracks, Jim Woods. He was the consummate professional rider. He shook my hand and with a mix of a smile and shaking of his head he said, “Geoff, you’re not riding the bike, it’s riding you. You need to go 20 m.p.h. faster into that turn to even be competitive on an amateur level!”

Wow, and I thought I was screaming.

I thank Mark and Jim for all their help. I shake hands with a couple of the other riders, all veterans, get out of my outfit and load up my truck.

The experience had been the most intense, adrenaline producing riding experience of my life—and I can’t wait to get back out on the track next week.